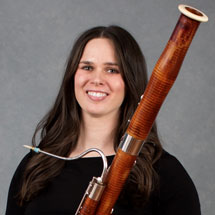 Bassoonist Nicole Haywood has made a name for herself as one of the fastest rising orchestral musicians in the country, having held numerous positions in professional orchestras and opera companies on both United States coasts. Currently, she looks forward to her new position as acting assistant principal bassoon of the Oregon Symphony beginning in the 2019/20 Season, and will proudly continue to serve as assistant principal bassoon of the Grant Park Orchestra in Chicago.

After a year of performances as the first-call substitute with the San Antonio Symphony, Ms. Haywood’s professional career began upon her appointment as acting principal bassoon of the Charlottesville Opera in 2016. In 2018, she won her current position with the Grant Park Orchestra and was appointed as acting second bassoon of the Kansas City Symphony. While with Kansas City, she took part in several significant projects, including her first recording credit: a collection of Brahms orchestrations in collaboration with Reference Recordings, including Arnold Schoenberg’s orchestration of Brahms’s Piano Quartet No. 1.

After years of working as a nanny for multiple families while she attended college, Ms. Haywood discovered a passion for working with young children. She combines this passion with her music through multiple outreach initiatives, including as part of the Grant Park Orchestra’s “Classical Campers” arts immersion program, where she serves hundreds of children each summer through interactive workshops and engaged musical storytelling. Spreading happiness and curiosity through music in these ways remains among the most gratifying of her work.