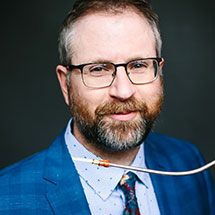 Professor of bassoon at the University of Oregon since 2000, Steve Vacchi joins the Oregon Symphony as acting utility bassoonist and contrabassoonist for the 2019/20 Season. His teachers included C. Robert Reinert, Rebecca Eldredge, Matthew Ruggiero, K. David Van Hoesen, Stephen Maxym, Frank Morelli, and William Ludwig. He holds degrees in performance from the Eastman School of Music (B.M. with high distinction/Performer’s Certificate), The Hartt School (M.M.), and Louisiana State University (D.M.A.), where he held a Board of Regents Fellowship. He also studied at the Yale School of Music. He has presented masterclasses at high schools, conservatories, and universities throughout the United States, South Korea, and China, and served as a faculty sabbatical replacement at Indiana University's Jacobs School of Music in 2014–15.