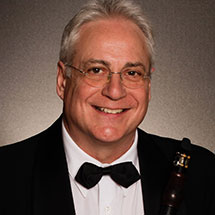 Portland native Todd Kuhns started playing clarinet at the age of ten. He liked the instrument so much as a teenager that he was inspired to mow lawns in order to help pay for his private lessons with Catherine Palladino, former Oregon Symphony principal clarinetist. An active member of the Portland Youth Philharmonic, he not only performed as principal clarinetist, but also appeared as soloist with the orchestra and won its Aspen Music Festival scholarship. He continued his studies with Palladino at Portland State University, eventually earning his Bachelor of Arts degree in 1981.

Kuhns began working professionally with a variety of ensembles in Portland, including the Portland Opera, Ballet West, Oregon Ballet Theater and West Coast Chamber Orchestras. He also played two seasons with Chamber Music Northwest. He has performed for dozens of musical productions and played in such eclectic groups as the Hester Street Klezmer Band and, more recently, Tango Pacifica. For many years Kuhns spent his summers participating in Oregon music festivals including the Peter Britt, Oregon Coast and Cascade Festivals. He still performs every summer with the Oregon Bach Festival and played on that orchestra’s 2001 Grammy winning recording of Penderecki’s Credo.

Kuhns returned to Oregon and joined the Oregon Symphony Orchestra as Bass/E flat Clarinetist in 1989. This performance marks his second solo appearance with the orchestra; in 1998 he was the featured soloist in Mozart’s Clarinet Concerto. He is also a member of the Third Angle New Music Ensemble with whom he recorded Stravinsky’s L’Histoire du Soldat and the chamber versions of Copland’s Appalachian Spring and The Tender Land.

In his spare time, Todd Kuhns enjoys fixing up his 1917 bungalow in southeast Portland and perusing antique shops. He and his wife, violinist Margaret Bichteler, have a two year old daughter, Elizabeth.