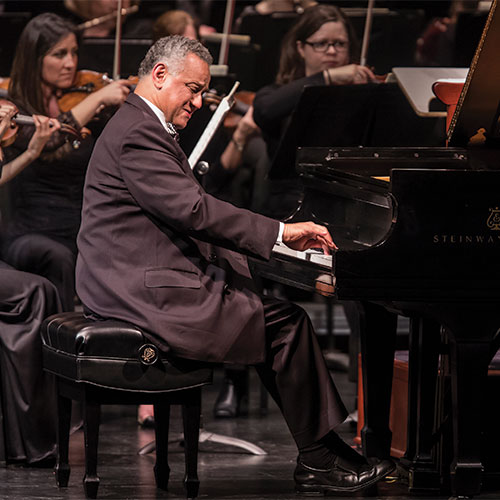 Watts joined us to discuss Grieg’s Piano Concerto, which he performs on December 2, 3, and 4.

André Watts, who first wowed audiences in 1963 as a 16-year-old prodigy on one of Leonard Bernstein’s nationally televised Young People’s Concerts, has nothing to prove. With a career that spans more than 50 years, he has performed with the finest orchestras and conductors around the world and has made dozens of recordings for a variety of labels, including Columbia, Telarc, EMI Classics, and Sony. In 2016, The Los Angeles Times raved, “Watts, who turns 70 in June . . . demonstrated the young virtuoso in him is alive and well but tamed by an expressive and mature artist. Throughout his recital, Watts achieved a level of authority and command seldom heard from a pianist of any age.”

Edvard Grieg’s A Minor Piano Concerto occupies a central place in the repertoire and is a staple of many up-and-coming performers, so it is something of a surprise to find that pianist André Watts didn’t perform this iconic work as a young man. “I learned the Grieg when I was about 12, but for some reason never performed it until I was over 50,” says Watts. “It’s difficult to prepare a piece you’ve never performed that is very famous, because you have to rid yourself of preconceived ideas. When you learn a piece like that it’s an incredible opportunity; you’re forced to start fresh and divest yourself of unquestioned tradition, which, as [pianist Artur] Schnabel said, is mostly mud-encrusted habit.”

Musicians’ and audiences’ tastes evolve over time. When Watts began preparing the Grieg for performance, he needed to discard decades of other pianists’ interpretations, some of which were overly lush for his taste. “For me, playing a really famous piece for the first time at 50 meant to clean it up. I had to question everything.”

In one way, postponing the Grieg until midlife made the daunting task of performing such a well-known work a little easier. “The heart of this issue – making your mark on a well established piece – if you have trained yourself and you are a musician now, your individuality is a given.”

At this point in his life, Watts doesn’t need to make his mark on Grieg; he is more interested in a deeper understanding of what Grieg wanted from the soloist. “You try to reexamine what you think the composer was trying to say,” Watts explains. “The infinitude [of interpretive choices] is the infinity of the individual – how many kinds of piano or forte are there? The freedom of the restriction of piano-to-forte in four bars is liberating, and it’s your opportunity to explore and dig deeper. How one digs is based on what one is.”

Watts’ preparation of the Grieg began with a close examination of the score. “You should know as much as you possibly can about the piece,” he says. “I studied the score carefully – are there any similarities of phrase elsewhere in the work? Is this piano-to-forte different from other piano-to-forte phrases? How?”

For Watts, as for all performers, balancing his own musical ideas against what the composer indicates is a subtle dance, but in the final analysis, the composer must prevail. “I start out trying to be as literal as possible, and to question myself when I see dynamic indications. If you find yourself in conflict with the composer’s markings too often, you shouldn’t play that work in public.”

Even after 20 years performing the Grieg, Watts still finds interpretive challenges in the music. “The piano entrance in the second movement of the Grieg – I can’t play that entrance exactly in time,” he admits. “In fact, you won’t find anybody who plays that in strict time.” Watts explains his dilemma: “Isn’t it your job to give expression to the notes as close to in time as possible? I trust my ear; I know what I believe Grieg wanted. My problem is my limitations as a player.”

What makes this concerto so special? In a 2014 interview, Watts talked about Grieg’s unique sound. “Grieg is very individualistic, and his harmonic movement is very specific. That is why it is easy to recognize Grieg’s music. As far as his being a great composer, he is also a wonderful craftsman. Even the cadenza is amazing. To have it written out and yet sound that improvisatory is a neat little trick.”

Watts has concentrated on 19th-century Romantic literature and is known for his performances of Rachmaninoff, Tchaikovsky, and particularly Liszt. Along with Liszt’s music, Watts also finds deep inspiration in the composer’s life. Like a pebble tossed into still water, Liszt’s influence rippled outward, touching the lives of many other musicians. “The aspects of Liszt that were meaningful to me when I was young were his incredible ability to practice and the amount of work he put in, and how great he was at playing the piano,” says Watts. “Also what a supportive colleague he was, and how many musicians he helped. I think Liszt was a genius and a man of incredible foresight and really a modernist, which people keep forgetting. [Aaron] Copland said, ‘We all pooh-poohed [Edward] MacDowell, forgetting what we took from him.’ We treat Liszt the same way.”

Watts’ affinity for Liszt began at age nine, when he learned Liszt’s Un sospiro (A Sigh). “The pieces that have stuck with me  the most since my late teens are the late works: Bagatelle sans tonalité (Bagatelle Without Tonality), Nuages gris (Gray Clouds), En rêve (Dreaming), Schlaflos! Frage und Antwort (Sleepless! Question and Answer). Those have been constant with me. Liszt once commented, ‘I’ve hurled my javelin into the future;’ I think that’s true. You don’t have to enjoy or like the music, but you have to give the guy credit.”

Musical child prodigies sometimes fail to build on the promise of their youthful potential; if not carefully nurtured, they can burn out from overwork. Watts credits his mother Maria, his teachers, and his first manager, William Judd, for helping him lay the foundation for his five-decade career. “I played my first concert with the Philadelphia Orchestra when I was ten, but it wasn’t until I was 13 or 14 that it occurred to me this could be my job,” he recalls. “I didn’t think of performing in terms of being like Rudolf Serkin or Arthur Rubinstein; I just thought of it as a job. Fortunately I didn’t think of the concert with Bernstein as a really big moment.”

Maria, herself a pianist, protected her son from the dangers of stardom. “Nobody in my circle put weird pressure on me to do well,” says Watts. “I was lucky that the people around me didn’t tell me to care about the wrong kinds of things, like success or media coverage. My mother was not a stage mother; she was tough on my playing, but she didn’t want me to play concerts. The manager I got told her, ‘We don’t want him to play 100 concerts a year and use him up like a squeezed lemon; we want him to have a long career.’” So far, so good.